(This is a Blog Paws, blog hop post …. taking advantage of the encouragement to publish words on ‘Wordless Wednesday.’)

No – you couldn’t exactly call it a ‘busman’s’ holiday, but I guess it was almost inevitable that I’d befriend a stray dog while recently on holiday in India. 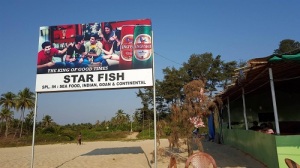 Sandy, or ‘Hazibabes’ as she was additionally referred to by friends we met, is technically a ‘stray,’ although during the holiday season, her  territory extends to about sixty metres either side of the Starfish Shack on Arossim Beach, South Goa. Although she bears the marks of several battles and seems ravaged by biting insects of some sorts, she appears in general good health.

She’s certainly well fed, by both diners at the shack like myself, and by the shack owners, who feed her a pile of waste scraps at the end of the day. 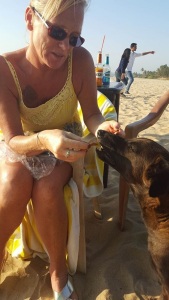 Sausages from the hotel breakfast bar are her favourite.

Sandy is also allowed to sleep under the shade of the sunbeds during the day, when even the January breeze fails to lower the beach temperature to below the mid-nineties.

At night time, she remains close to the shack, providing an early warning of any intruders, human or animal, to the few shack cooks and staff who also sleep in the open by their premises.

It’s a healthy relationship, although some diners are not so keen when territorial disputes arise. And that’s what happened on my last evening in Goa this year.

The sun was sinking fast beyond the horizon on the Arabian Sea. It was a glorious send-off. A memory to last the next fifty weeks until my return. I decided to wander about a hundred metres down the beach to help the local fishermen launch their boat. 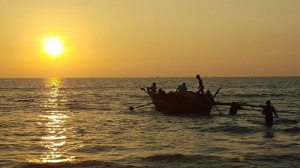 Sandy had been in the habit of ensuring Diane (my wife) walked safely to the edge of her territory each evening during our stay – her way of thanking us, I guess, for feeding her and fussing her throughout the day.

This night, though, she happily danced along the beach with me, perhaps not realising I was not heading in my ‘normal’ direction. Then, after about seventy / eighty metres, she noticed she’d strayed into the two neighboring male dogs’ territory! She immediately dropped onto her back in total submission as the two dogs quickly approached her.

(Having watched the packs of dogs along the six mile stretch of beach for many years, I can categorically say there is a definite ‘line in the sand’ which must not be crossed by dogs without invitation.)

I left her to help the locals, every now and then looking back to ensure she wasn’t under any duress. But when I went to fetch her, to return to her shack, the two males decided the time to play was over.

I called her and she started towards me. So did her unwanted suitors. They trotted close by her side, but wouldn’t allow her to approach me. Instead, they started to bark aggressively, at both her and me, and proceeded to shepherd Sandy into the sea. When she tried to break away, one would deliver a sharp bite. When she retaliated, the other would attack on her blindside.

My initial reaction was let nature take its course. After all, from the scars she bore and the bite marks on her ears, it was apparent Sandy had found herself in similar situations before. But as I watched, the aggressors were becoming more violent, and forcing poor Sandy deeper into the sea.

I’d broken up dog fights before, of course. But in India? Where rabies is still a threat? I held back.

I watched for a few minutes, as locals passed by, totally disinterested: another day, another fight. So what?

I couldn’t head home to Scotland the next morning, though, without knowing what happened to my wee pal. I waded in.

Keeping what I hoped a safe distance from the attackers, I managed to ‘shoo’ them away a little from Sandy. But she was petrified; rooted to the spot, she wouldn’t move. The two males moved back in, casting threatening looks in my direction as they once again pounced on Sandy.

Right! No messing now. It was complete bluster on my part, but I moved in closer. I stood tall (a neat little trick for a five feet, four inches short-arse) and shouted in my most authoritarian voice, while waving my arms confidently. I ordered the two bullies away.

A local lad had been watching from about twenty metres beyond me. Emboldened by my stance, he now joined in, slightly, by throwing wet sand at the now retreating males.

There was now a bit of distance between them and Sandy, who by now had cottoned on. I noticed she wasn’t running the risk of further incurring their wrath by wandering back onto their sand, and she walked quickly with me along the shoreline until she was confident that she’s crossed that imaginary line in the sand that denotes the beginning of her territory.

Ten minutes after the attack started, we arrived back at the Starfish, wet sand sticking to just about every inch of Sandy’s soaked coat. I dried her off as best I could and ordered her a plate of crispy garlic chicken.

I patted her ‘goodbye.’ I’d see her again in eleven months, hopefully.

I couldn’t blame her for not walking me to the bridge at the end of her territory that night.

Even Sandy found something amusing in ‘Damp Dogs & Rabbit Wee.’ 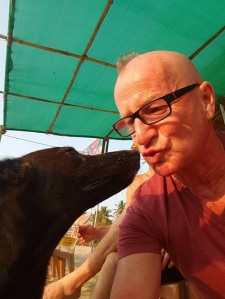