There’s a lot to be said for sharing the outdoors with special and loyal friends. Watching them grow from mischievous wee scamps, into mature adults with their set routines and quirky habits, is all part of the fun.

And this was certainly the way with Jazz,  a nine-year old black labrador.

Jazz started walking with me at the age of five months, so was one of the ‘senior’ members of the pack and took on the unofficial role of pack leader. He was indeed one of the ‘lads,’ readily accepted by the others, but he was always seemed to remain a little bit aloof.  I likened him to an army brigadier at times, strutting around, head held high …. and in my imagination with a silver topped staff tucked under his front legs!

If some of the dogs were getting a bit excited and needed to be brought in, I’d simply call on Jazz who would respond immediately, and the others would follow.

This may have been because they realised Jazz was the one most likely to elicit a positive response from me to the request for a biscuit.
“Go on, Jazz – you ask. You’re good at it.”

And, ok – I’m a bit of a mug for a cheeky and pleading face. The ploy generally worked, and everyone was happy. 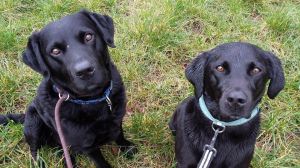 Jazz with his ‘special’ friend, Cali.

Sadly, Jazz passed away in his sleep earlier this week.

He will be sorely missed by both his human and doggie families.

And me, of course.

An author and his nonsense.
View all posts by Cee Tee Jackson →
This entry was posted in Daily blog posts and tagged black, dogs, Jazz, lab, labrador. Bookmark the permalink.